A famous story regarding Mori Motonari is the one involving arrows. Motonari had three sons, Mori Takamoto, Kikkawa Motoharu and Kobayakawa Takakage.

He gathered his sons together and gave each one an arrow, and told them to break it. This they did with ease. He then gave each of his sons three arrows, and told them to break the three arrows at once. It couldn’t be done. “The three of you are like these arrows,” he told them. “United, you are stronger than standing alone. This is the way to protect the Mori clan.” This story is so famous in Japan, that even those with little interest in history are aware of it.

In the Warring States period, although family was considered important, it was not that uncommon for fathers to fight sons, or siblings one another. The message from Motonari in this case, was one of unity and family ties. Unlike in the business world and certain sports where individual effort is rewarded, Motonari called for teamwork to defend the house rather than seek personal success. That is the collective sum of the Japanese spirit, and there are many who would empathize with this story.It may be a coincidence, but have you ever noticed the Mori clan crest? 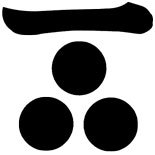 It features the character for “one” above three stars. Somehow, the story of the three arrows, and three brothers uniting as one seems to tie in nicely with the image of the crest, don’t you think?

The story of the three arrows is a reminder of the importance of family ties, and the power of numbers. As important for us now, as it was to Mori Motonari, in the days of the Warring States Period.